How old does the Universe LOOK to you?

The following is part of a conversation I had with a Catholic whom I like and admire:

No doubt you may still have in your mind that Evolution, Deep time and Big Bang Cosmology are science- established facts based on observation. 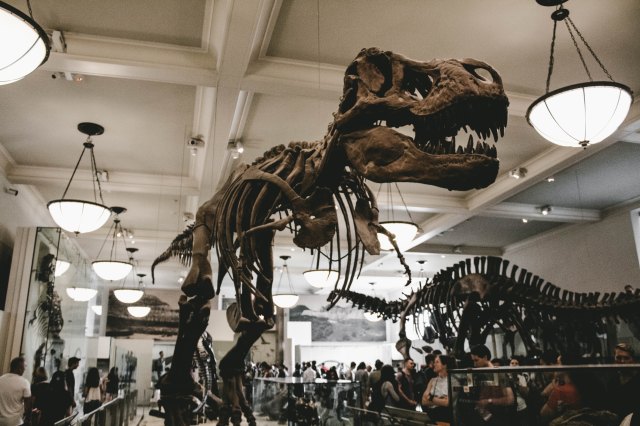 Do these bones make my dinosaur look old?

“If reason (not ideology) indicates that Genesis 1 is not a scientific account of creation, then the revelation contained in Genesis 1 must be something other than literal.”

If you literally mean what you say here, that proving Genesis is not a scientific account (but rather a HISTORICAL account) would, by that fact prove it cannot be taken literally, then you are making the case that NO historical account can every be taken literally, and only SCIENCE books can be believed to mean what they say. I don’t think you mean that. And despite your words, I think you mean something different than what you said because of the larger context of this comment.

See? This stuff is wonderfully applicable to your everyday life.

“Observation shows us (observation, not ideology) that the universe is mysteriously old and vast and that life on earth became more and more complex over the ages (or “days”).”

And it is here that I must simply state that you are mistaken. This is entirely false. Science (Observation) show us NO such thing, and I shall prove that.

How do you know BY LOOKING how old the universe is?

Can you tell by their color the age of the stars? Is color the same as age?

Can you look at a mountain and know how old it must be because you know what a brand new mountain would look like? What does a NEW mountain look like? Or a NEW tree?

Do you know for certain that the moon could not have gained all of its craters in only 6,000 years? How long does it take to gain that many craters? How many did it have when God made it?

I can say with some confidence that there is not a single thing you have ever observed which you knew the age of by looking. How do we tell the age of something? Can you measure its age with a ruler? With a scale?

What is the instrument of age?

Age is not something you can see, it is something which must be calculated, but those calculations are based on assumptions. Let me give you a few common examples:

It is believed that you can cut down a tree and count the rings to determine the age of a tree. But right away, are you counting years? No, you are counting rings. NOT TIME. You must ASSUME that the rings are equal to the number of years the tree lived- but how can you know that unless you already know the age of the tree you are attempting to date by its rings?

The assumption is not a bad one, as in most environments, with a normal annual weather cycle, a tree will grow one set of rings per year. However, in drought years a tree may grow none, and in years with wild fluctuations and lots of rain, trees have been seen to grow as many as a dozen in a single year. In places like rain forests, this can happen regularly. Those rings are actually a record of growth influenced by weather- NOT a record of time.

The Grand Canyon has a small river running at its bottom- the Colorado River. By calculating the amount of sediment the river erodes per year, we can calculate the amount of time it would take for the river to erode the canyon- 6 million years. But what is being measured? The PRESENT RATE OF EROSION- an estimate of the weight of rock removed from the canyon walls. NOT TIME.

The ASSUMPTION is that the rate of erosion has ALWAYS been the same, but we CANNOT KNOW that to be true. It must merely be assumed.

If the river was greater in the past, the erosional rate would be greater as well, and the river could cut the canyon in less time.

It formed in a single day.

Deep time ASSUMPTIONS say this is impossible, but we watched it happen, and it is not the only one of its kind. A LOT of water in a LITTLE time can do the work of a LITTLE water over a LOT of time. Geologists come to the conclusion that Grand Canyon took six million years BECAUSE OF CERTAIN ASSUMPTIONS. Not Because of measurements.

The rock layers which make up Grand Canyon is a mile deep and is made of many layers- sedimentary rock, laid down by water some time in the distant past. It is assumed that the present, slow rate of sedimentary deposit, such as accumulates around rivers when they overflow their banks in the spring rains, was the same method of accumulation in the past, thus making the rate of deposit around a thousand years per centimeter of depth. But what are we actually MEASURING? We are measuring the rate of sediment build up in certain places today, and we are measuring the thickness of rock layers in Grand Canyon. Not time. A greater flood will leave greater piles of sediment.

Engineer’s Canyon is lined with walls made from rock layers, each layer deposited in water some time in the past. Thin layers which we are told take a thousand years per centimeter to accumulate make up the walls, and thus the rock into which the canyon is cut must have taken millions of years to be deposited. But this is wrong. How do we know?

Because we SAW these rock layers form in 1980 over the course of three DAYS.

Deep time assumptions are unprovable, and there is an unending list of events happening BILLIONS of times faster than Evolutionary “science” assumes they can.

To reach a DATE or an AGE from this method, scientists must make three unprovable assumptions:

First, we can never prove these to be true for any rock, fossil, or rock layer, because they are assumptions about the unobserved past. But even worse for deep time advocates, we CAN prove these assumptions to be potentially faulty.

But these methods get one step worse for deep time- They can be used to prove deep time FALSE. Carbon 14 decays so quickly that, were the entire earth a ball of C14, it would have entirely decayed into its daughter element in less than a million years. Yet, we find C14 still in dinosaur bones, is coal, and in diamonds. Things which are supposed to be millions or billions of years old are dated, by this method, to be less than 50,000 years old.

This list goes on and on. In short, deep time is BUILT on assumptions NOT observations. What we OBSERVE is C14 and soft tissue in dinosaur bones, rock layers and canyons being formed in single days, tree rings being formed a dozen in a year, etc etc etc.

There is not a single observation which REQUIRES millions of years to explain,

yet there is a vast list of things which demand a much younger earth and solar system. Again, I cannot get into everything, and I encourage you to do the homework to see for yourself and learn about these things from the scientists in their field who show that observation supports the Biblical narrative, both in creation and the flood.

Let me overstate this, because I sense that, like many people, you may feel the position of the Young earth Creationist is built on the stubborn belief that Genesis MUST be taken literally no matter what SCIENCE says. But this is NOT the case. Observational science FAILS to support deep time, big bang or evolution. None of them can be defended without a foundation of unproven assumptions, many of which have been shown BY observational science to be FALSE. But the case FOR a young earth is also built on observational science. I am not claiming merely that science fails to support deep time, but also that it SUPPORTS the young earth model.