All the Things are Bad: Charlie Brown Edition

Remember when black Americans had to deal with oppression and injustice? Apparently no one on America’s social justice left does. I mean, it doesn’t take a LOT of research to find out what it was like decades ago when, in certain neighborhoods filled with Democrats who were still bitter about how the Civil War ended, a young black boy could be literally beaten to death for whistling at a white girl. THAT is what we USED to mean by oppression and injustice- being murdered for being flirtatious. Today, only Brett Kavinaugh would have been attacked for that behavior.

Today’s warriors for social equality have a different idea of what it means to be oppressed. Today, oppression for black Americans means being forced to sit in a lawn chair… ALONE.

And by “Being forced” of course we mean, “Being invited by someone who considers you a friend” and by “alone” we mean “On the side of the table with the least amount of people.”

But that lawn chair is a REAL lawn chair. The struggle is real. 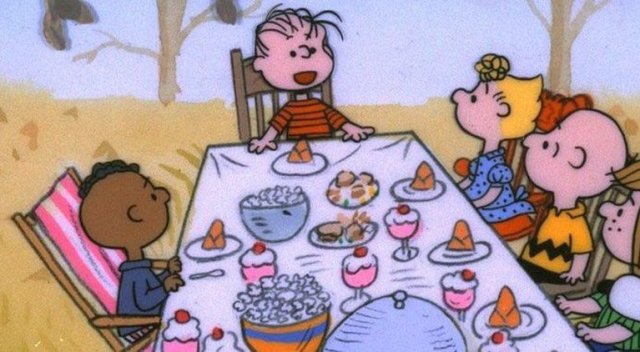 According to the Daily Wire: “People on social media have expressed outrage over the fact that the lone black character Franklin in “A Charlie Brown Thanksgiving” appears seated differently juxtaposed to the white characters during the famous dinner scene where Charlie Brown serves popcorn and toast to his hungry guests instead of turkey and stuffing.”

YES- all the things are bad. You May be tempted to look at this table covered in food, surrounded by friends celebrating the Thanksgiving Holiday together and think “Isn’t that nice?” BUT YOU WOULD BE WRONG! It is racist and bad and probably President Trump’s fault.

The ONLY black character is forced to recline in a comfortable lawn chair of the kind you might take to the beach! And the injustice doesn’t end there. He is allowed… excuse me… FORCED to sit on the side of the table with the most elbow room! Which is racist… because elbow room… you know. Racist.

And he actually chose which seat he was going to sit in. From the five which were available to him. So… But still. Racist.

Ok, let’s all admit that the above single still frame from the animated cartoon is oddly weighted. It does look like Franklin is sitting on that side of the table alone. But when you actually watch it, you can see why.

And let’s all ask ourselves what kind of a world we are living in wherein I need to do this kind of scrutiny on a Charlie Brown cartoon. Has it really come to this? It has. First, all of the characters come out the back door of the house and sit at the side closest to the house (…lazy little brats). Second, the green chair at the corner between Peppermint Patty and Marci (who is, arguably, more isolated than Franklin) is where Snoopy brings out the food and does whatever comedic business he does. Finally, the characters are arranged for the framing of conversations they have during their popcorn-heavy meal.

So in short, Frankly decides where he is going to sit. He’s not oppressed, he has the power of choice.

Also, let’s consider that not only is Franklin invited to join the group here, but he is welcomed to join Charlie Brown’s family at his grandmother’s house for the Brown family Thanksgiving. If we are really going to consider a comfortable lawn chair and dinner at your friend’s grandma’s house to be racism and oppression, then I would strongly suggest we are scraping the bottom of the oppression barrel to find victims in America. The fact that anyone needs to stoop THIS LOW to find examples of racism in America tells us one of two things, depending on how you choose to look at it:

Either that racism in America is gone. It’s over. There is no more oppression and injustice to speak of. Whatever is wrong in America, there is another reason for it.

Or that, whatever warm invitations are offered to minority friends, and whatever place they may choose to sit, one thing remains: All the Things are Bad.

Read the original story from The Daily Wire.

This entry was posted in SocioPolitico, Uncategorized. Bookmark the permalink.

2 Responses to All the Things are Bad: Charlie Brown Edition