Someone tell Santa that the ground is LAVA!!!

Canadian rabblerouser and language-police protester Jordan Peterson has said that telling your kids that Santa is real is not wrong, because, as he says,

“Look, I think “lying” is the wrong way of thinking about this. Santa Clause is a game. Its a game of pretend. And Children play games of pretend all the time, so I don’t see any harm in it at all.”

This question comes up every year around this time-  Is it wrong to lie to your kids about Santa? Professor Peterson here has taken the popular approach of deciding that it is not REALLY lying, because its fun. Yes, you are intentionally convincing your children to believe something which you KNOW not to be true, but its OK because its FUN! THEY enjoy it- until they’re sitting on his lap at the mall, at which time they scream and cry as if they suddenly think they are on a playground slide covered in spiders which ends in a meat grinder. On the other hand, there’s not a mall-Santa in the world as terrifying as the average Mall Easter bunny. But I digress.

But what of Professor Peterson’s idea that it is a game? That sounds reasonable. Children LOVE games of pretend, and they play them a lot- sometimes well into adulthood. The problem with this idea is one VERY vital feature of those games which Professor Peterson seems to have overlooked:

I’m sure you’ve seen kids play “The Ground is LAVA.” You pretend that the floor is covered in lava and you have to make your way around the room without touching the floor or you burn to death. The reason this is fun, other than the fact that its an excuse to climb around on the furniture, is the fact that the kids KNOW IT’S NOT TRUE. They KNOW it’s just pretend.

Now suppose you convinced the kids that the floor really was lava. Still a fun game to play on a Saturday afternoon? No- those kids will be terrified- ALMOST as terrified as they are when they see that mall Easter Bunny costume and realize that  you are going to sit them on that thing’s lap and STEP AWAY!? WHERE ARE YOU GOING?!?!? DON’T LEAVE ME! THIS THING IS GOING TO EAT MY HEAD!!! 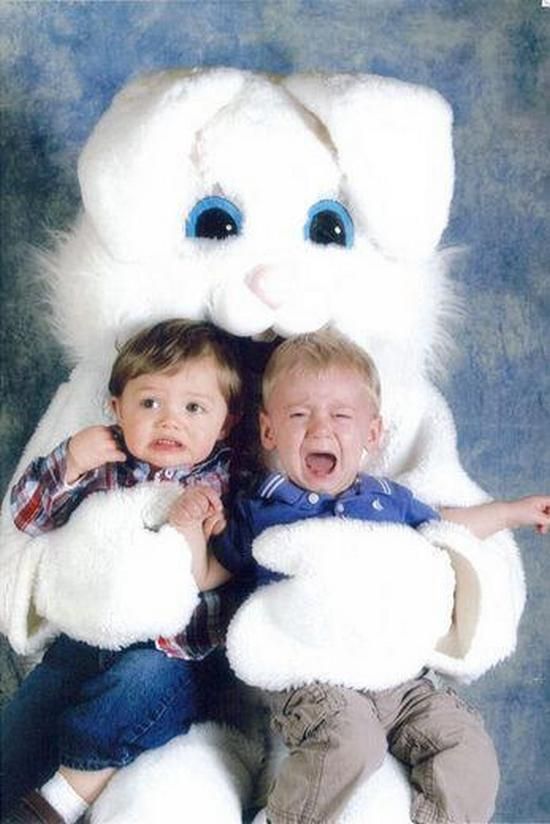 Now, I know what some of you are saying. Santa is a lie, but its a lie which they ENJOY! Its FUN for them. Believing that you’ll burn to death if you touch the floor isn’t as much fun. That makes it OK to lie to your kids about SOME things, right?

Well, let’s see what God has to say about it. Don’t you roll your eyes at me.

And in John 8 Jesus says of Satan, “He was a murderer from the beginning, not holding to the truth, for there is no truth in him. When he lies, he speaks his native language, for he is a liar and the father of lies.”

So… it SEEMS like God is opposed to lying. And while I’m no Bible Answer Man, I don’t know of any verses where God clarifies with “Unless you’re lying to children, or to make someone happy. Then it’s ok to lie.” But maybe it’s because I use the ESV. Maybe that verse is in the Message.

In order to clarify this for those parents out there who are not convinced, let me remind you- those kids will be teenagers someday. What do you think they are going to do when they are up to no good? They are going to LIE TO YOUR FACE because it is the LIE that will make you happy. When you find out that, instead of going to Wednesday night Bible study like they TOLD you, they were REALLY somewhere far from church with substances which are not legal for them to ingest and in a state of undress unbecoming of a Baptist, you will of course have to admit that the TRUTH made you far less happy than the lie. What makes you unhappy is discovering the truth. HOWEVER…

I think we both know the answer to that question.

Consider this also: Would you tell your kids to fully trust someone who lied to them for YEARS? At best you are going to say, “Every year for Christmas I LIED to your face, over and over and over, and about something which wasn’t really all that important. But now that you know I was lying, YOU CAN TRUST ME. I’m done lying to you.”

Doesn’t that sound like something a politician would say?

And as an apologist, let me tell you what happens to those kids when they grow up and discover they’ve been lied to. They become bitter atheists. Talk to any really BITTER and ANGRY atheist, and eventually they will compare God to Santa Claus and you will see that this is some jaded child who WILL NOT BE FOOLED AGAIN! It does lasting brain damage to some kids. Trust me.

So what is the answer? Play the game, but TELL THE KIDS ITS A GAME. My daughter has known since she could talk that the Santa game is a game, and its really ME who buys her those presents. I’m not letting some mythical fat man take the credit for toys I’m buying with my own hard earned money. Or rather, whatever toys my wife buys for her with her own hard earned money. Look, the point isn’t which parent actually spends time shopping for, buying, and wrapping those gifts, its that we’re not going to pretend some long dead bishop of Turkey spent his time on Amazon.com to give those gifts to my daughter. Because as a parent, that’s the part of the game which I hate to lose.

At the end of the day, while YOUR kids are tossing off a half-hearted thanks to some imaginary beardo from the North Pole, I’ll get a “THANK YOU Daddy!” from the little girl I love, and to me, that feels like I’m winning the game.

2 Responses to Someone tell Santa that the ground is LAVA!!!