All the Things are BAD: Veggie Tales Edition

In case you were ever tempted to think that anything is good, California has apparently been gathering groups to inform us that ALL the things are bad. Today’s group is- and once again the believing is hard to be doing– a group of students at a California college’s “Annual Whiteness Forum.” Part of the reason this is hard to believe, aside from the cartoon like conclusions which all seem to have originated from the mind of a Sponge Bob villain of some kind, is that the group is run by Professor Dreama Moon.

I suspect we can easily decode this professor’s stance on the legalization of weed, but I digress.

Now, this “Annual Whiteness Forum” is not a group OF white people- because that would be racist- but a group talking ABOUT white people- because condemning a group of people based on their skin tone and ascribing to a racial group negative stereotypical characteristics is racist UNLESS that group is white people, or Christians, or probably Jews, or Conservatives…

Actually the “Annual Whiteness Forum” made this easy by listing various things they decided are racist, such as (and I am not making any of these up) the NFL, women who support President Trump, and of course, Veggie Tales.

According to Fox News, “A female student made the claim that by humanizing vegetables, the creators of VeggieTales were using the children’s programming to promote racial stereotypes by making the villains racial minorities.”

Fox includes the following image, which has the kind of professional appearance and journalistic integrity of presentation that one would expect from, for example, a 7th grade girl who forgot about the science fair until 13 hours before it was set to begin, and who needed to print out her display at school that morning and so didn’t have the time for the glue stick to dry just right before putting it out on display in the gymacafatorium. But props to her for choosing the pistachio colored paper. Its those little touches which make all of the difference when it comes to ribbon time. 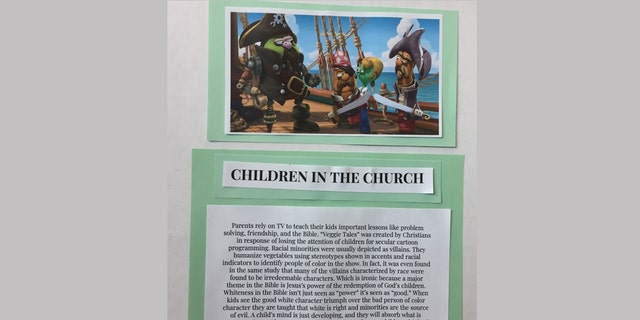 If you take a close look, you will see the image she chose to represent this dangerous evil is from The Veggie Tales movie, “The Pirates Who Don’t Do Anything.” This image is above the centered and single spaced (SIGH/roll my eyes) paragraph in which she claims Veggie Tales promotes “racial stereotypes by making the villains racial minorities.”

You will notice that flanking the blond haired hero character in the center of the picture (Obviously racist), there is a pirate on the left- the blond character’s uncle (who is actually green, on account of being a vegetable, but obviously of the same “race” as the hero- specifically his father’s brother), a pirate holding the blond hero character (A carrot, which are usually voiced with Midwestern ‘white’ voices or- in the case of a reoccurring character- a Scottish accent) and on the far right is another villainous pirate who has a blond mustache and beard, making it fairly unlikely that he is intended to represent some racial minority.

In short, this person chose- to represent the manner in which Veggie Tales uses “racial stereotypes by making the villains racial minorities” – a picture with THREE villains in it, none of which represent any kind of minority nor racial stereotype.

Of actual villains in the Veggie Tales videos, they have used an asparagus with a British accent, a Zucchini named Nebby K. Nezzer, who for all practical purposes is Ebeneezer Scrooge with an American voice (most recently voiced by white actor Robert Paulson),  French Peas with French accents (not typically grouped with racial minorities), and a collection of other assorted characters.

If you know Veggie Tales, then you know that the only real reoccurring villainous character who is in any way possible a racial minority is Mr. Lunt who is described by the Veggie Tales Wiki as “a decorative Latin gourd… who grew up in New Jersey,”. The problem here is that the ethnicity of Mr. Lunt has never been made clear. As he is never heard to speak any Spanish or Portuguese, it is hard to nail down what kind of LATIN he is meant to be. Frankly, his accent is a little vague, much like internet superstar email checker Strong Bad. He could be Italian as far as anyone knows. What’s worse, after a short stint as a bad guy, he became so well liked by audience and production team alike that he became a hero character. In fact, in the movie pictured at the “Annual Whiteness Forum” Mr. Lunt is one of the title characters and very much one of the good guys from start to finish.

I could go on but I think the point is well made. Veggie Tales is no more racist than any produce section can be. First, because fruits and vegetables are NOT human, nor ethnic, nor “races” of any kind. Second, the person making this claim actually chose an image proving the exact OPPOSITE of what she had claimed; an image from a movie which has as one of its primary heroes one of the only arguably (yet admittedly vague) ethnic minority characters. Speaking of admittedly vague- what do these people think “racist” means?  Because if even simply having an “Annual Whiteness Forum” is not actually and blatantly racist, then perhaps the biggest problem with racism in America right now is that no one has ANY IDEA what it means.

As evidence of my conclusion, consider this student’s presentation and claim. She has somehow managed to prove that Veggie Tales is not RACIST, if by racist you mean it “promotes racial stereotypes by making the villains racial minorities.” But perhaps we can agree that Veggie Tales (And the NFL and Women who voted for Trump, etc) are in fact racist if we can agree that by “Racist” we simply mean that “All the things are bad.”

Read more about it: https://www.foxnews.com/entertainment/veggietales-is-racist-and-dangerous-for-children-california-students-claim

This entry was posted in SocioPolitico and tagged Veggie Tales. Bookmark the permalink.