Lately, the church attenders in our nation have wondered how, if it’s so obvious that Genesis 1-3 are meant to be read as literal history, that so many people with college degrees have decided that it is a literary device meant to teach a spiritual lesson and not real history. Their point is a good one- why would educated people fail to miss the obvious historicity of Genesis 1-3  and then themselves write all kinds of theories about how Genesis is a metaphor for the ancient pagan temple dedication, used by Moses as a literary device to describe how God formatted the world in the guise of a temple, like maybe the Egyptians would have done.

It is something of a quandary, and I think I can clear it all up by having you ponder one facet of literary history: Moby Dick. 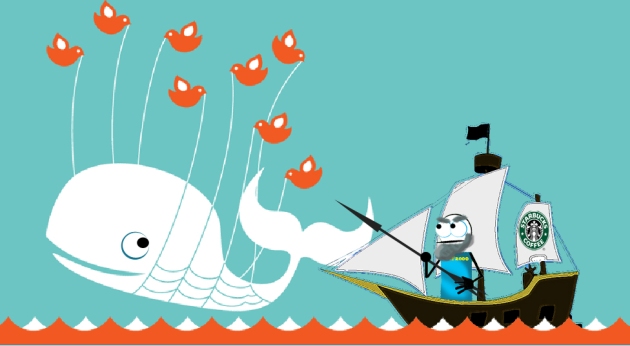 Moby Dick is a book by Herman Melville, where in a rather career focused man named Ahab hunts a Big White Whale to the ends of the earth until it ends up killing almost everyone he knows.

The subtle humor is lost on most people.

No doubt you have read the book in school at some point, or seen it in movie form. If you have, you will know that Moby Dick is a whale. A Big White Whale. You can deduce this fact by putting together some of the subtle literary clues sprinkled throughout the book, such as the fact that everyone in the book says Moby Dick is a Big White Whale. The narrator (call him Ishmale) managed to convey this fact about seven hundred times. The characters get on a whaling boat, and try to harpoon Moby Dick, who they describe as a big white whale.

Are you following me so far? Moby Dick is a Big White Whale. There is NO way you can miss the fact that Melville tried VERY hard to convey this fact to the reader so that none of us would get to the end of this book and have to ask, “Who was this Moby person? Richard Moby? Was he Ahab’s father or something? Or did he steal Starbuck’s wife?” From the very start, even school children can tell you

this is a book about a BIG WHITE WHALE.

Then those kids get to college. Their English teachers, who have more degrees than Fahrenheit and have spent decades in Universities, will discuss this book by saying things like this:

“What was Melville trying to convey by the use of the Moby Dick icon?”

And their students will look around the room, fairly sure they missed something, and the teacher will ask again,

“In what way is Moby Dick meant to represent the conflict between the natural, self governed ways of the American Indians and the sweep of Anglo-American government interfering with previously established cultures?”

Her students will begin to panic as she continues, “When Melville describes the Moby figure, you must clearly see the whiteness of the great beast and the conflict between Moby and the traditional hunter figure of Captain Ahab as the monstrous spread of the white man into the ancient culture of hunter gatherers which originally inhabited the Americas. Furthermore, you see the turning on its head of the iconography as Ahab, dead and sprawled over his boat, is the Christ figure of the story, crucified by the white beast as the American Indians were by the American expansion to the west…”

At this point, one of the students will blurt out, “Wait! Isn’t Moby Dick a Big White Whale?” And the University professor will shake her head with pity, mutter to herself, “Probably home-schooled…” and continue on her lecturing for DAYS until everyone can see how only a fool would think Moby Dick really was a Big White Whale.

Eventually professors just like this one will take a look at Genesis and say, “Well of course a SUPERFICIAL reading of the text would seem to indicate that creation was a literal week of six days, but the literary subtext (directed by our knowledge of Big Bang cosmology) is clearly meant to convey vast eons of time where in a creator figure or figures is imposing order on a chaotic proto-world.” Her students, who once were naive enough to think Moby Dick was a big white whale, will nod in agreement with her brilliant insight, and she will get a book deal.

Not to question the sincerity of such authors, but let’s all agree that, if you write a book which says Genesis teaches Darwinian Evolution, you get on CNN with Chris Matthews with a panel of other rich authors making fun of Ken Ham together. If you write a book that says Genesis teaches that God made the world in six days, you’re not getting national news attention unless you pose nude on the cover, or have a strong enough arm to hit the Queen of England with a copy of it as she drives by in the Boxing Day parade. If you can do both, Chris Matthews may make fun of you directly. It’s not fame and fortune, but it’s a step closer than you were.

So why do PhD’s reject the idea that Genesis teaches a literal, historical account of the creation of the world by God in six actual days? Because once you have enough Literary Brain Damage, anything is possible. I mean, come on. These are the same people who can no longer tell that Moby Dick is in fact, a Big White Whale. With all due respect, you’re better off with Willy Wonka than you are with Old Earth Creationists or English teachers. At least Wonka’s world of pure imagination comes with candy. If they really want to be clever, then let’s have the PhD collection explain THIS: Why was a whale named “Moby Dick” in the first place? If you can write a book about that, I’ll buy a copy- unless you’re naked on the cover.

This entry was posted in Philosophy, The Creation SoapBox and tagged Genesis, Moby Dick. Bookmark the permalink.