Q and A: Isn’t Evolution Logical?

Today’s question is about Evolution:

What are the biggest problems you see with Evolution exactly? The more I look into it, the more it seems like evolution is more logical. I mean why can you accept small changes over a small period of time but large changes over large periods of time seems impossible?

A very good question, and in a sense it sums up the whole debate.

No young earth Creationist I know of would suggest that living things never change. No YEC organization would say that God created all existing species as they exist today during Creation week. Species change all of the time. New species are discovered every year, which strongly implies that new species are forming, as opposed to us simply failing to identity millions of species for hundreds of years. Given enough time, can’t small changes add up into big ones? 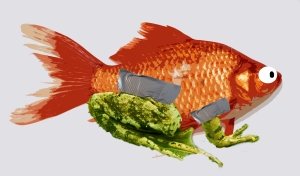 On the surface, I agree that this sounds very logical. The problem begins with the word “Changes.” You probably haven’t given a lot of thought into what this word means. Most textbooks do very little to define it. They say just what this question has said- living things “change” over time. Little changes add up into big ones. Evolution!

In essence, there are three kinds of changes- additive, subtractive, and neutral. For instance, if I paint my car a different color, that is a neutral change because it has little effect on the car. It won’t run any better or worse, or get different gas mileage, or effect how much weight I can carry in the trunk. Or I can have my tires moved around so that the ones which are on the front are now on the back and vice versa. It’s a change, but not one with much impact.

If I replace my old engine with a more fuel efficient one, I have added new ability to my car. It will get better gas mileage and run smoother. It will be less affected by the harsh winter weather and will run in snow storms instead of shutting down. It will save me money! Money I can spend on nachos. Mmmm…

On the other hand, I can remove from the engine every part which is not made of metal. This will make my car more resistant to heat damage, as metal has a much higher melting point than plastic or rubber does. However, my car will not function at all. Without shielding on the wires, or belts, or all the other non-metal parts, the car will not go anywhere.

All three of these are changes. If I add parts, if I take away parts, if I move around parts which were already there, I make changes. But it ought to be clear that not all changes are equal. If I show up on your door step with a sledge hammer and a chainsaw and ask to make some changes to your car, you will want to consider this carefully.

Now, which kind of changes will turn a worm into a fish, or a fish into a lizard, or an ape into a human? Consider that all of the parts and behaviors of living things are coded for in their DNA. Can you take a worm, and shuffle its genes enough to make a lizard or an eagle or a moose? Nope. Can you take a worm and REMOVE enough of its genes to make a humming bird or a coyote or a Bengal tiger? Nope.

Here is why Evolution is in fact impossible:

I cover all of these in more detail on my Defining Evolution series which you can watch here:

or you can read here: https://abitoforange.com/archives/ (Scroll down to the Defining Evolution section)

Now, let’s consider the logic as science reveals it. Like I said, on the surface, it seems logical that Nature, left to itself will change. And it makes sense that little changes add up over time into big ones. But when we examine the kinds of changes that actually happen by themselves, we actually see a general trend downward. Geologist call this erosion- Mt Rushmore and the Sphinx will change until they are featureless. They will not- if left to nature- become more defined and humanlike. Physicists call this entropy- the 2nd law of Thermodynamics. In short, every system in the universe is gradually running out of usable energy, and every system moves from information and energy into chaos and homogeneous decay. Biologists call this Genetic Entropy– the genome of every species on earth is gathering mutations a little faster than our cellular spell checkers can fix them, which means genetic diseases are increasing. Eventually every species on earth is going to go extinct- if left to nature. THAT is what nature does to genetic information on its own. THAT is what we see when we study DNA. As I have made clear, I reject the evolutionary millions or billions of years, but even if you accept them, you have a bigger problem. If the human race had been on earth for a million years, we would have gone EXTINCT a thousand times over. Genetic entropy is not solved with more time. It becomes lethal.

Nature cannot account for information. The laws of physics and chemistry forbid it. Nature can only degrade and decay. Information REQUIRES an author, and it is far more logical to say that God wrote the DNA language than to say that DNA decayed into existence from simpler chemicals.

Every science discipline points toward our Creator God and validates scripture. Evolution seems reasonable as long as you use hazy words like “change,” but the moment you define the terms and look at the data and discover the probabilities, you see that Evolution is an embarrassing lie. Here’s a metaphor: If you hear a man has died of a gunshot wound, you can easily and logically believe that he committed suicide, or accidentally shot himself while cleaning his gun. Once you discover that the gun is a six shooter, and he was shot 47 times with it, those options are no longer reasonable. I reject evolution because I understand it.

Evolution requires one to remain in the dark, either because of a lack of information or because they choose to close their eyes. If you want to see why I reject evolution and why you should too, learn MORE SCIENCE. Demand MORE EVIDENCE. Don’t settle for the interpretations of the fossils, ask to see that fossils. Don’t settle for hazy terms like “change,” ask for a description of the changes. And don’t get your understanding of the Bible from internet memes or snooty British biologists- read the Bible.

As always, I recommend you search Answers In Genesis or Ian Juby via youtube for these topics if you want to learn more in depth (and see more cited support from the secular, evolutionary sources). If you have more questions, let me know. But I want to let you know that a better understanding of the facts will show you that science supports the bible from cover to cover, just as archeology, history, and philosophy do. Don’t stop asking questions until you come to know and embrace the fact that

This entry was posted in Q&A and tagged Evolution. Bookmark the permalink.