I recently wrote an article for Creation Today about the different ways in which Young Earth Creationists (YEC’s) and Flat Earthers interpret the Bible. You can read it here: https://creationtoday.org/flat-earth-vs-creationism-a-biblical-perspective/

In reply, I had a fellow named Scott imply that I had misunderstood and therefore misrepresented the perspective of Flat Earth believing Christians. During a jaunty bit of back and forth, I was reintroduced to some of the many arguments and evidences which are used in defense of the Flat Earth. One of these is an explanation for the sunset.

According to the flat earth model, the Earth is a essentially flat plane (as opposed to a ball) and the sun orbits around the north pole about 3,000 miles overhead (The sun is either 40 miles across or 300 miles across, depending on how you ask. Yeah, I know. There’s not one standard accepted flat earth model as of yet.). So how do they explain the appearance of sunset? It certainly looks as if the sun descends the sky and then falls below the horizon every day which, of course, fits the globe model we’ve been told in school but not the flat earth model. The answer, I was told, is simple. It’s all a matter of perspective.

Just as an airplane maintaining a constant distance over the earth appears to rise and then fall as it passes you, the sun does as well. And check out this meme I found on the internet; 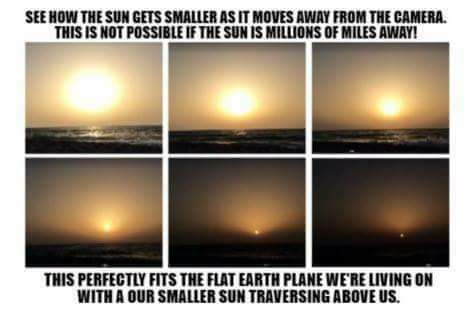 Naturally, this bit of info caught my attention, but I didn’t feel persuaded. I thought there might be other explanations for the observed data.

If you’re an evolutionist, perhaps this sounds familiar. Perhaps you have offered what you feel is an airtight bit of evidence for Darwinian Evolution, such as the fossil of the “Dog-Bear” or the fact that your genes aren’t 100% identical to your mother’s genes, or the fact that someone wrote a paper where in they expressed belief that a particular monkey protein which exists today may have been two different proteins between 6 and 40 million years ago (and you explained to me that this is an example of modern science “observing” a new gene being created by evolutionary processes) and yet, I didn’t agree that you had proven evolution to be a fact. (All of these are real examples)

This is something like that. I get what you’re seeing, but I’m not coming to the same conclusion.

But unlike the presumed biological and genetic changes which may have happened millions of years ago- long before any human was on earth to observe it- this claim involved something I COULD directly observe- THE SUN!

For my evolutionist friends, this illustrates the difference between Observational Science (I can observe the sun) and Historical Science (you can’t observe what happened in the genome of monkeys who lived millions of years ago because you were’s there at the time). Some of you seem convinced that there is no difference on account of Bill Nye saying there is no difference. Tell you what- I’m about to show you pictures I took of the sun. If you can show me pictures of monkeys taken between 6 and 40 million years ago, I will agree that there is no difference between observational and historical sciences. In the mean time, check out these pictures I took of the sun! 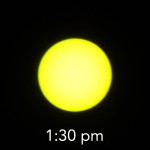 This is what the sun looked like at 1:30 pm. I know, this looks like a circle I cut out of yellow construction paper, but this is an actual, untouched photograph. All of the photos I am going to show you were taken with the same camera, with the same telephoto at maximum zoom, and on the same day. The only difference between the pictures of the sun and the airplanes is that I used the shield from a welding mask to take the pictures of the sun. If you just take a picture of the sun with no shielding, it will probably damage your camera and your eyes will burst into flames. DO NOT look at or photograph the sun without some kind of SUPER heavy protection and no, normal sunglasses do not work. Invest $10 into this and get a welding mask like I did.

Here is a spectrum of pictures taken across almost 8 hours, from apex to almost sunset. As you can see, there is no observable change in size from when the sun is right overhead- presumably the closest- and at it’s furthest point just before sunset.

In order to have something with which to compare the sun, I took pictures of various airplanes throughout the day to see if there was a noticeable change in size as they went over. Here is what I observed:

Clearly, even while not moving nearly as far, the airplanes changed in apparent size a CONSIDERABLE difference. And of course, this is what one should expect, because this is what we always observe. Naturally, we don’t have this same familiarity with the sun because we don’t spend our days watching the sun move overhead unless we are a crazy person who enjoys having his eyes burst into flame. [reminder- DON’T look at the sun with your naked eyes!] At the risk of being redundant, let me show you all of the photographic, observed evidence at once:

With no help from NASA, you can observe that airplanes do change in apparent size a LOT when flying past, and yet the sun appears the exact same size in the sky even though it moves ‘down’ the sky in a similar fashion. In mere seconds the plane goes from large to tiny, and in eight hours the sun stays the same size. If one were hoping to explain away the sunset with perspective, the observed facts are of no help.

This should bring to mind that image above showing the sun getting smaller as it sets. That series of pictures is generally exposed for the entire landscape- you can see the waves over the water in all of those images. But if you look closely, you will see that the sun is only dark enough to be seen as the clear circle it is in the sky in the very last frame, just as it is setting. The reason it appears larger in the other images is because it is brighter. What you are seeing in those images is not the sun, but the area where the brightness was too much for the camera to render any detail. In photography terms, we call this, “Being blown out.” You will notice the same effect in streetlights or a flashlight if the camera is exposing for the area around the light and not the light itself. If you were to expose for the sun itself as I did, you would not be able to see the landscape- it would be too dark.

Here’s a few pictures of the same candle I took to prove the point.

In the first picture it looks like the flame is HUGE, and the flame appears to shrink across the pictures, but this is just a simple matter of lowering the exposure. Try it at home!

In fact, try all of this at home. Get a welding mask and photograph the sun for yourself. You’ll see exactly what I’ve shown you here- it doesn’t appear to change size. This makes sense if the sun is HUGE and very far away so that the change in distance is negligible as the day progresses from noon to night. But if you are holding to a flat earth model, you now have several observations you can make yourself with no help from NASA and which do not require leaving the ground that do not fit your model.

I’ll probably do more on this in the future because I love doing science, but in the mean time, I’d love to hear what you all discover. Do your photos show the same things mine do? If you held the flat earth view, did this cause you to change your mind or at least doubt the explanation you were given? And if you’re an evolutionist… you know Bill Nye isn’t a real scientist right? He’s a hack actor riding the dying wave of fame from having a kid’s show in the 1990s. Also, while I still think their model is wrong, I would suggest you stop using the term “Flat Earth” as a mere derogatory term of disdain. The fact is, their model is wrong, but it still isn’t as absurd as Evolution.

This entry was posted in Uncategorized and tagged flat earth, sunset. Bookmark the permalink.