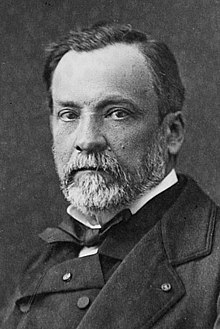 In the fall of 1860, the Linnean Society of London gathered for a dinner at which scientific papers were shared and discussed. One of the works discussed at length was On Origin of Species by Charles Darwin, first published only two years prior. The keynote speaker was Louis Pasture. Following is a transcript from the night’s proceedings.

Master of Ceremonies: Gentlemen of the Linnean Society of London, it is now our honor to welcome the esteemed French Biologist, Mr Louis Pasteur. Many of you know him as the microbiologist and chemist renowned for his discoveries of the principles of vaccination, microbial fermentation and pasteurization. His work has not only proven the Law of Biogenesis, but has also contributed to our ability to halt the spread of disease, and the ability to preserve foods for much longer than previously possible, which will open doors for a boom in the grocery economy and safety for food consumers all over the civilized world. Gentlemen, please welcome, Mr. Louis Pasteur.

[a light smattering of polite applause]

Louis: Ok, look, I was going to read this paper on various methods of pasteurization, trademark mine by the way, but I just sat here listening to you old heifers prattle on and on about Charles Darwin’s new book, On the Origin of Species, blah blah blah. I have my copy here. I read it, and we need to have a littler family chat. Where is Darwin?

Hey, Chuck. You stink at writing. Anyone ever tell you that?  Dull as dirt and I gotta say your emotional issues bleed through this like a stuck pig in a satin dress shirt. Even on the cover you already stink. First of all it takes six and a half minutes just to read the cover. Ain’t nobody got time for that. A book needs a title, Chuck, not an abstract for your paper. How about something catchy, like, Darwin’s Magical Mystery Tree? Or, Evolution, a User’s guide. Or more accurately, “Sorry to bother you, but if you squint just right, don’t I look like a monkey.”

And did you even think about the title of this thing? If you actually read you own book you’d know that natural selection can’t be the origin of anything. It’s an editor. You better add a section in the next edition explaining that or people are going to think you’re an idiot. How do you name the book Origin of Species by Means of Natural Selection, and then write a book where in you explain natural selection only REMOVES already existing variations? Look, just change the title. I’ve just given you two good reasons and several good suggestions.

And you need an illustrator. What is this garbage? It looks like a four year old tried to draw a giraffe from space. I don’t know what your skills are chuck, but I know drawing isn’t on your resume. You know the camera was invented more than 25 years ago. Why don’t you get some nice black and white photos in here and stop scribbling like a drunk toddler?

But let’s talk content. I don’t know if you’re sober enough to have caught this when the stuffed shirt introduced me two minutes ago, but I have proven the LAW OF BIO-GENESIS. Hear that word LAW, Chuckles? That means it’s part of the natural order. You can’t break natural law the way you do moral law. You can ask your wife/cousin about that if you’re confused. But while you don’t state it clearly in here, and let’s face it, you hardly state ANYTHING clearly in this pitiful rag, your theory sort of demands a violation of the LAW which I proved. I can’t tell if you’re stupid or you just don’t bother reading anything written by scientists, but tell you what, I’ll send you a free, autographed copy of some of my work so you can learn why your work is such a piece of garbage.

And you bunch of monkeys. OK, looking around the room, I can see why you bunch of Godless alcoholics are ready to buy into this embarrassing fairy-tale. I’ll say it, I appreciate the honesty of Thomas Huxley, who I was unfortunate enough to be stuck sitting next to at this shin dig. Between the salad and the entree he says to me, “It is as respectable to be modified monkey as modified dirt’.” The sad thing is, he thought he was paying himself a compliment. Not so, my little bulldog. You’re just a dirty monkey.

Look there’s only one way you’re going to get this garbage into public schools. You’re going to have to pervert and abuse the separation of church and state. Have the ACLU sue schools for teaching the Bible and get the politicians to force this caca down their throats. Your atheism aside, this stuff is far too stupid to fall under church, but it’ll be right at home in state. Politicians flock to stupid like flies to a fresh duce.

Also, see if you can’t get them to stop teaching logic in schools. You won’t last a week if those kids know how to think, Chuckles. Because as long as people in the Western world know how to think, they’ll be accepting MY theory, excuse me, MY natural LAW, based on testable, repeatable, practical science, and not your poorly written psudoscientific dribble, godless rambling fairy-tale. You’re an idiot Chuckles, and you need to give up this playing at science. Go back to Build a Bear where your actual talents can be used. Also, the entree was terrible. My chicken was as dry as the MC’s sense of humor. Louis is out.

Check us out at https://www.youtube.com/abitoforange
And don’t forget to subscribe!

This entry was posted in The Creation SoapBox and tagged creation, darwin, design, Evolution, Louis Pasteur. Bookmark the permalink.