Today we’re going to dust off the cobwebs of our minds and try to remember way back to our various math classes. Remember how the cover of the book always looked like the jacket for some Atari racing game or 1980’s pop album cover? Remember that thing the teacher had which held chalk and allowed him to draw perfect circles on the board? Remember that blond girl from Alabama who sat behind you and managed to learn nothing every day even though the option of being distracted by an i-phone was still years away? Those were good times. Oh, and there was something about numbers. Try to remember some of that, because today it will help. 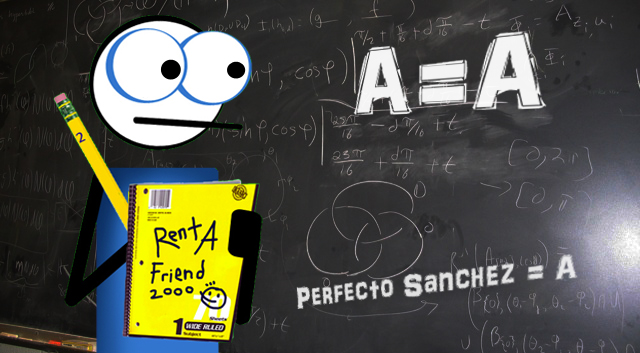 Roach Clowns all the time be trying to set the bar for acceptable proofs for God’s existence so high that NOTHING could ever be acceptable as evidence in favor of the Biblical world view. One of the things they demand is “100% certain mathematical proofs”. Conversations on social media tend to sound like this:

Roach Clown: If you want me to believe God exists you’ll have to show me evidence that is 100% mathematically certain!

You: You want me to prove God exists with math? You know God isn’t an equation, right?

You: No, really. Let’s talk about what you think the word “God” means. Because it seems like you have no idea.

Last time I showed how demanding 100% certainty is an unreachable goal, because the skeptic can choose to reject ANYTHING as certain, even his own existence. If you can’t convince a person that he exists, there’s no point trying to talk him into anything else. After all, if it’s not certain he’s there, who are you even talking to?

Demanding 100% mathematical certainty merely shows how the Roach Clown doesn’t understand math. Math is not based on deductive or inductive reasoning where in evidence is shown to strongly support a conclusion. Math is based on something much simpler. We can be absolutely sure that 2 + 2 = 4, not because of science, nor because of smart people doing smart things in smart books or on smart TV shows (if such a thing exists) but merely because of the definition of the terms.

The Law of Non-contradiction says that anything (A) is itself (A) and thus, for anything

Anything is itself. Of that we can be 100% certain.

When you are asking for mathematical proofs for the existence of God, what you are saying is, by definition, God is someone that exists, and thus, God=real? Can God’s existence be proven with 100% mathematical certainty?

Saint Anselm of Canterbury did that like a thousand years ago. You’re welcome. So, I guess I’ll see you in church. If that girl from Alabama is there, don’t sit near her. She’ll just be playing Candy Crush on her i-phone.

Join me next time as we get Ontological, and remember, #JesusLovesYou

This entry was posted in atheism, Philosophy and tagged certainty, math, Proof of God. Bookmark the permalink.

6 Responses to Proof of God 2: Sleeping Through Math Class