The rare frilled shark is considered a “living fossil” because evidence of its existence dates back to at least 80 million years ago. This summer, researchers found one alive and thriving off the coast of Portugal, uncovering more clues about the resilience of this ancient sea creature.*

“Molecular Clocks” is a theory used by evolutionists to support deep time. It says that DNA mutates at measurable and predictable rates, so we can use it to determine how long it took two species to evolve from their common ancestor.

Then the rare frilled shark comes swimming up and says, “Hey guys! What’s going on?” 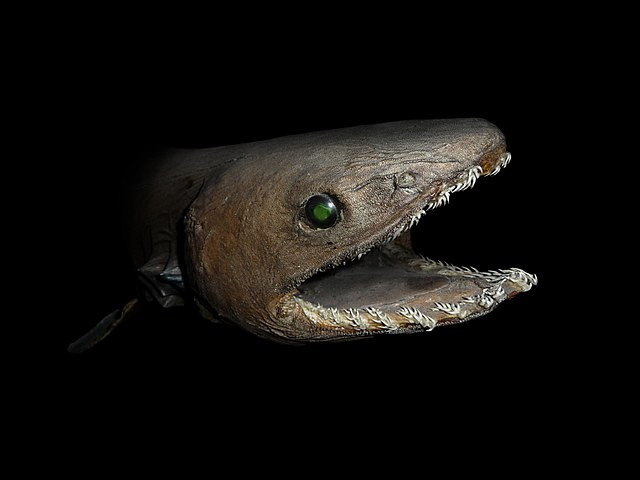 And the evolutionists say, “Rare frilled shark! We haven’t seen you for AT LEAST 80 Million YEARS!”

And the shark is all, “What are you TALKING about? Clearly I’ve been swimming around off the coast of Portugal all of this time.”

And the Molecular Clocks all say, “OK, except for this shark, and obviously the horseshoe crab, and the platypus, and… maybe a few hundred other plants and animals, ALL DNA is mutating at regular and predictable rates so that we can determine how many MILLIONS OF YEARS it takes for them to evolve. Because that is still TOTALLY a real thing. Millions and millions.”

And the Creationists say, “Or maybe it isn’t true that mutations are regular and predictable. MAYBE evolution isn’t happening at all.”

And then Bill Nye and Richard Dawkins make their throats hoarse trying to out-scream each other with slogans like, “Christians hate science! SCIENCE DENIERS!!! RELIGIOUS FANATICS!”

And even the rare frilled shark rolls his eyes and goes back to swimming around the coast of Portugal, not evolving for any imagined millions of years. And also, just plain old not evolving. But even the evolutionists have figured that out by now.

Check us out at https://www.youtube.com/abitoforange
and don’t forget to subscribe!

This entry was posted in The Creation SoapBox and tagged Evolution, molecular clocks, rare frilled shark. Bookmark the permalink.