I don’t know if its possible to give spoilers to a 150 year old debate about a 6,000 year old Creation story, but if so… here’s your SPOILER warning. But seriously, you should just go read Genesis chapter one right now. How have you made it this far without reading the FIRST chapter of the Bible? Come on, people! Turn off the TV and READ something!

Last night I got to see The Genesis Movie: Paradise Lost, made by the collaboration of several different groups, but spearheaded by Eric Hovind of Creation Today. I managed to get the last ticket of a sold out showing, and I entered the theater with very little in terms of expectations. I had seen the trailers on line for several years now, but they gave away quite little of what a full length feature would provide.

To be honest, I went in with low expectations. After all, its not often that a film focused on Biblical creation gets into theaters, and after being SORELY disappointed with God’s Not Dead, I set my expectations fairly low as I went into The Genesis Movie. Now that I’ve seen it, I can say with sincerity that I was impressed. The Genesis Movie was VERY well made with a high production value and high quality in terms of cinematography, set design, lighting, editing, CG, etc. Nothing about it felt amateurish or left one having to make excuses like we do for many other Churchy movies about churchy stuff.

The Genesis Movie is a well made movie.

I would give it 4.5 out of 5 stars. It accomplishes what it sets out to do, its beautifully shot, brilliantly edited, and does right what so many other productions do wrong. And it’s full of great information that shows that the Bible can be trusted from the very first page. And I’m all for that.

The film clocks in at just over two hours long, and I never checked the time until the movie was over. That alone should speak volumes about a movie of this kind. If I had been told I was going to watch a science documentary which was two HOURS LONG, I never would have thought it would hold my attention so well that I wouldn’t check the time before the first half was over. But it was so well paced and so interesting, even though I am familiar with all of the material presented because I am that kind of science nerd, that I didn’t even know it WAS two hours long until I looked at the time. It didn’t FEEL long.

Their web site has a lot of great new video material which will give you a good idea of what the movie is like, but I will sum it up for you here.

In short, this is a science documentary about Biblical Creation. It is also a visual journey through Creation as described in Genesis chapter one, with admittedly a fair amount of artistic licence. 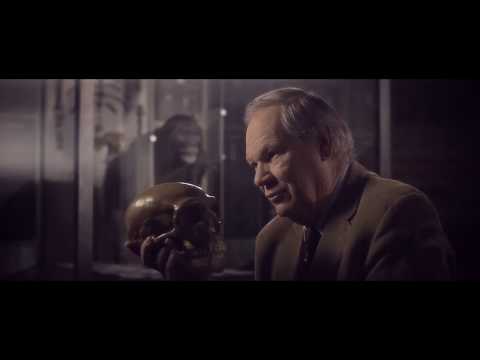 Each section begins with the documentary interviews of familiar Creationist faces, from Ken Ham, Georgia Purdom, David Menton and Bodie Hodge of Answers in Genesis, as well as G. Charles Jackson, Ray Comfort, and Danny Falkner, and many others. The interview segments are spliced between the different speakers, so that the film doesn’t linger on one person too long. The editing really kept up the pace and make it much more interesting than a simple lecture from one of them would have been. Also, the locations (mostly within the Creation Museum from what I could tell) and the lighting was really beautiful and made each shot artistic and interesting. Not a single shot was dull and not a single segment dragged. MOST of the shots were visually impressive and quite beautiful.

After the topic is discussed, the film takes the viewer into what I am calling the artifact room. This is a CG room filled with models and books and statues, all representing different facets of the Creation/Evolution debate. Like the previous section, I thought this was very well done, well designed, and well produced. It covered the topics well and presented great visuals to reinforce the key concepts.

After that room, we were taken into the Genesis story of Creation. The Genesis Movie took us through the Creation account of Genesis chapter 1 a day at a time, with the narration coming right from the Bible and the visuals depicting what it MAY have looked like. I think everyone should know going in that there is no option BUT to use artistic license, and as such the fundamentalist nit wit that lives in all of us will be tempted to say, “It shouldn’t done oughta look like THAT!” But we weren’t there either, so we should all just chill. The visuals are great, and it is at least a very interesting visual depiction of the creation of the heavens and the earth.

Because I am a dork, I have to critique the CG. For MOST of the people who watch this movie, the computer generated world and effects will look amazing. Unless you are a nerd like me who studies the behind the scenes of movies and computer graphics, you may not even be able to tell that many of the shots are CG. The water effects, just to name one, were so good that I sometimes could not say if they were using real footage or CG, and that goes for many of the trees and animals as well. I describe it as being like a really good video game. For those of you who think video games are Super Mario Brothers, then you will be blown away. For those of you who play Halo 5, you will be at the very least content, if not actually impressed. I thought it was great, and it left me wanting more.

The topics addressed are a basic introduction to the science of the Creation/Evolution debate, from fossils and geology to the formation of stars and galaxies. I say basic because each of the presenters in the movie has given hour long lectures on various facets of their own expertise, but the Genesis Movie does a very good job of whittling it down into the core ideas, while still seeming to be comprised of conversations and not written and rehearsed lecture notes. I sincerely don’t know if they did write the script, or if they simply gathered people so well versed in the topics that they could just talk about it for a while and make a tapestry in editing. In all, it comes across as people passionate about their field of study and their faith in the Bible talking about things they are familiar with. It never FEELS rehearsed or prepackaged. It just feels like these people know their stuff and they are passionate about their faith and science. Once again, it is very well done.

A few things are missing from the earlier trailers. First, there is no Genesis chapter 2 or 3. No snake. Second, in earlier versions they got around the garden of Eden nudity by having the first couple shining in appropriate places like they were wearing pants made of sunlight. In the final version they just let Adam and Eve be naked, but used camera angles, foreground objects, lighting and focus allow them to keep their PG rating. It’s much less contrived and while it is probably obvious to anyone who thinks about it, it never feels forced or pandering in the ways they avoid showing too much of the first couple.

My only real complaint is with the theater and not with the movie itself. The theater I saw it in was not showing it in 3D, which bummed me out, not only because it was made to be seen in 3D, but I could tell there were a LOT of shots which would have been AMAZING in 3D. The film makers clearly took advantage of the 3D  in crafting a lot of shots. So, I for one will be seeing it again in 3D when the opportunity arises.

In short, I was very pleased and I would recommend The Genesis Movie to anyone. I am tempted to say I would recommend it to anyone who is interested in the topic, but the fact is, if you are NOT interested in the topic, then you probably need to see this more than anyone else does. Especially you atheists who don’t know any more science than you vaguely remember from 5th grade science class. This would be really good for you.

See it, buy it, share it with friends. You will not be disappointed. And I can almost guarantee that you will learn things you didn’t know about a lot of interesting things, and in the end you will have a better understanding of how science support the claims of scripture, showing that the Bible can be trusted from the very first page, and evolution is the faith that the facts have failed. The Gospel is presented very clearly and after all is said and done, it is all about Jesus.

This entry was posted in Recommendations, Uncategorized. Bookmark the permalink.