I’ve been explaining why I am a Young Earth Creationist, which means we’re looking into SCIENCE! Recently we’re looking into the alleged evidences for deep time which are used to show that the Genesis account of creation in a single week about 6,000 years ago must be wrong. So far the Big Bang has failed, and now we’re seeing how geology also does nothing to falsify YEC (Young Earth Creationism). What Geology does is examine the layers of rock which exist on all continents on earth. Last time, we saw that those layers can form very quickly, so having a lot of layers does not necessarily mean we have a lot of time. It can mean we had a BIG mudslide or massive flood. That works for us. We believe there was a massive flood. We also believe it was nothing like that movie with Russel Crowe and Hermoine Granger.

The layers we find all over the world meet at clean lines, showing that there was not time for erosion to occur between one and the other. In the Grand Canyon, we can see a mile high pile of rock layers which meet at clean lines. What do we find in LOTS of those clean layers? Marine invertebrates.The earliest, and many of today’s best geologists acknowledge the flood of Noah to be the only event which would make sense of such huge and even rock deposits full of sea creatures. For more on the Grand Canyon- Check out Ian Juby discussing it HERE.

This is where you expect me to say something about radio dating methods. OK, here you go: They almost never have anything to do with this. We’ll talk about that more next time.

But there is a bigger problem with using the fossils to date the rocks than mere circular reasoning. The fossils are dated using the evolutionary theory. We believe a certain type of creature evolved X Million years ago, so when we find the lowest rock layer that has that fossil, we decide the rock layer is X Million years old. But how do we know the lowest layer with that fossil represents the time when the creature first came into being? We don’t, and I can prove that.

Where we find fossils in the rock layers ONLY tells us when the fossils (On evolutionary assumptions) were laid down. It CANNOT tell us that the species did not exist before or after that time, or even that they do not exist today. Case in point- fossils tell us that the coelacanth (a fat flippered fish) went extinct (according to Evolutionary dogma) 65 million years ago. How do we know the fish went extinct? Because we do not find any fossils of this fish in more recent rock layers. But a funny thing happened in the early half of the 1900’s. We found some coelacanth- not in the fossil record, but swimming in the ocean.

The fossils don’t tell us the whole story, because while the “fossil record” shows the fish disappearing, the fish himself tell us, “The news of my extinction has been somewhat exaggerated.” And if I may, I think Monty Python sums up my feelings on the evidence in the fossil record; “I will not buy this record- IT is scratched.” 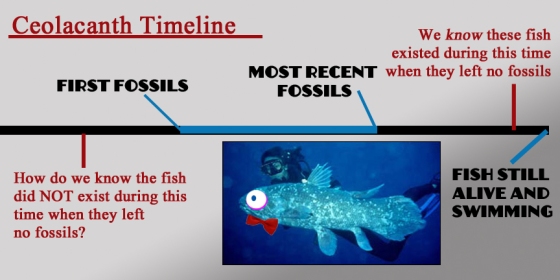 To clarify- if you draw a timeline of evolutionary history, somewhere on that timeline we see the earliest Ceolacanth fossils we have being formed and assume that he did not exist before that. We see his line end as we hit the layers of rock where he no longer show up and assume he has gone extinct. But 65 MILLION years later, he’s still swimming around. This means that, even given the deep time and evolutionary assumptions about the geological column, the fish is capable of existing for 65 MILLION Years without leaving a fossil. How then can we know he did not exist BEFORE his lowest fossil without leaving one? We can’t. He could have been there from the very beginning.

So what follows? If we can’t use the fossil record to create the evolutionary history, then we can’t use the evolutionary history to create the timeline which is used to date the fossils which are used to date the rocks which are used to date the fossils according to evolutionary assumptions. In the end, deep time is built on a pile of “IF” and “Maybe” that are demonstrably false. To date the rock layers with deep time, you have to first make a host of assumptions- assumptions which we can prove to be false. Rock layers don’t need thousands of years to form. Canyons can form quickly- in days or even hours. Fossils don’t prove when a species began to exist, nor does a lack of fossils prove a species is extinct. There is nothing in Geology which demands the conclusion of deep time. From any observable fact, the earth may be 6,000 years old.

Even if all of their assumptions weren’t the hot mess they are, the logic is. Dating a fossil by the rock it’s found in while using fossils to date the rocks is completely invalid. It’s like two criminals using each other as their only alibi. But you needn’t take my word for it.

“And this poses something of a problem,: If we date the rocks by their fossils, how can we then turn around and talk about patterns of evolutionary change through time in the fossil record?”
NILES ELDREDGE, Columbia Univ. TIME FRAMES, 1985, p.52

“A circular argument arises: Interpret the fossil record in the terms of a particular theory of evolution, inspect the interpretation, and note that it confirms the theory. Well, it would, wouldn’t it?”
TOM KEMP, Oxford, New Scientist, Vol.108, Dec.5, 1985, p. 67

“The rocks do date the fossils, but the fossils date the rocks more accurately. Stratigraphy cannot avoid this kind of reasoning if it insists on using only temporal concepts, because circularity is inherent in the derivation of time scales.”,
J. E. O’ROURKE, American Journal of Science, Vol. 276, p.51

This stuff is no secret to the scientists actually digging fossils and examining rocks. It’s the textbooks and their dedication to evolutionary dogma which leaves the students in the dark about so many facts. We’re told over and over that SCIENCE has discovered the age of the earth, but I hope you can see now that Evolution has determined the age of the earth based on a lot of blind leaps of faith. I can say with confidence that real science, meaning observation and reason, defends the Biblical account of creation, including the age of the earth. She may look a bit worn, but the old girl is only in her thousands.

Deep time rock and roll has only one more trick up its sleeve, and next time things are going to get radioactive! And as always, remember #JesusLovesYou

This entry was posted in Confessions of a YEC and tagged creation science, flood geology, Geology. Bookmark the permalink.